Our Jewish brothers and sisters have been much on my mind lately.

As we celebrated our own Messianic Passover on Maundy Thursday, I thought about Jewish families celebrating Passover in their own gatherings as we too celebrated the freedom that God provided for the Hebrews as they escaped slavery in Egypt and the freedom that is ours through God’s presence in Jesus Christ. On Monday, April 16th at 7 pm, I attended the Holocaust remembrance service at Temple Achduth Veshalom. We are all called to reflect on what evil can do when good people do nothing… say nothing.

To reflect on those who have the courage to put their very lives on the line for what is right.

Would I have the courage to lay down my life to protect and stand up for another? I sometimes wonder. 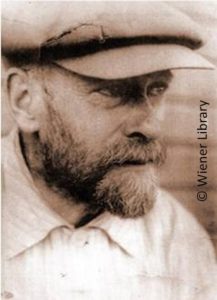 Janusz Korczak (pronounced using a soft ‘ge’ sound, ‘Korge-ack’) was both a medical doctor and an outstanding educator, who was committed to social justice. Because of his passion for children and their care, Korczak opened two orphanages in Warsaw, Poland. As the Nazis rose to power and they herded the Polish Jews into a large ghetto in Warsaw, which was nothing more than a prison camp within the city. The wall they built around the Jewish ghetto divided Korczak’s two orphanages—one inside the ghetto and one outside.  He had a choice to make and decided that the children inside the ghetto needed him more and so he stayed with them. As the Nazi noose tightened, former students of his made arrangements with false papers and a secret room to get him out of the ghetto and hide him in safety.  But Korczak stayed with the children. And when the Nazis came and loaded the children on a train bound for the Treblinka concentration camp, he had the choice to walk away. But again, he stayed with the children, holding their hands and comforting them—even at the cost of his own life.

All the way to the gas chamber.

Most of us will never be asked to die for Christ as his disciples.

But here’s the question: Can we LIVE for Christ as his disciples?

When we see injustice and oppression around us, do we remain silent or are we willing to speak up?

When we see need around us, do we step up and get involved?