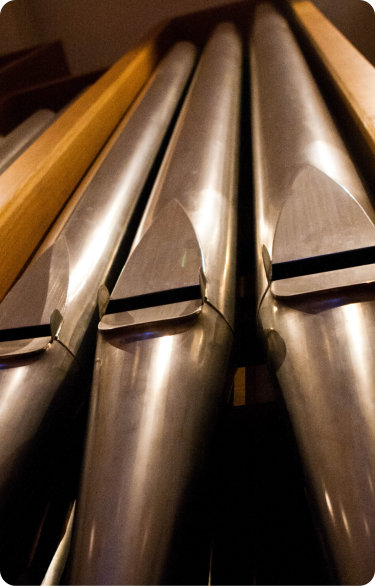 First Wayne Street’s mechanical action pipe organ was designed by Rudolph von Beckerath of Hamburg, Germany, and was installed in the rear gallery of the sanctuary in the fall of 1974. It has three manuals and pedals with 37 stops (51 ranks) and a total of 2520 pipes. The organ is composed of four divisions of pipes, three of which are housed in the main case. These three divisions are the Great, the Swell, and the Pedal. The Great includes 14 ranks of pipes (a “rank” refers to the number of pipes which sound for any given stop when a note is played), and is the backbone of the organ: its principal chorus leads hymn singing. The Swell is composed of 12 ranks of pipes in the center of the case, under the Great division: these pipes are “under expression,” meaning they are behind shutters that can be opened at various degrees or fully closed. This allows the organist to subtly adjust the volume of the music coming from these pipes. The Pedal includes 13 ranks of pipes which are placed on both sides of the main case. It includes the lowest-sounding notes, which provide a sturdy foundation for the organ’s sound. The Pedal also contains stops that can be played as solos. The fourth, the Ruckpositiv, is located in the gallery railing and is therefore closer to the congregation, allowing its gentle solo stops to be heard more clearly, and its brilliant chorus to pack a greater punch.

First Wayne Street’s organ is highly unusual: for one thing, even though it was built in the latter half of the twentieth century, it has a mechanical key action which operates with a series of levers and pulleys – the way organs did in the time of Baroque Era composer and organ virtuoso Johann Sebastian Bach. This allows the organist to have greater control over the articulation and “speech” of the pipes. When combined with the stunning acoustics of First Wayne Street’s sanctuary, the result is thrilling.

You may give online by clicking below.